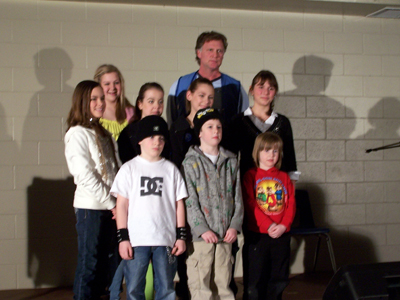 This year’s Optimist Club Talent Contest was held in the Nick Smith Centre.

MyFM’s Pete DeWolf was the Master of Ceremonies.

This year’s winners included: (Art) Logo Winner : Vanessa Farmer. Dance: Allysa Perreault and Jazmyn Nicholas. Singing: Augusta Campoli (Who sang “Think of Me” from the Phantom of the Opera.) Overall: Vicki Brittle. There were also prizes given to the youngest girl and the two youngest boys (there was a tie in the youngest boys category.)

Participants in the 2010 Optimist Club Talent Contest (with Chris Toner)

In a surprising turn of events, the winning singer gave the monetary portion of her winnings back to Optimist Club President (and prize presenter) Chris Toner, saying she hoped that would help the Optimist Club continue to do their good work.