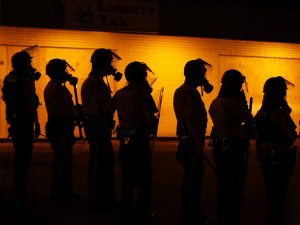 -Analysis- Is Michael Brown’s shooting really about race?: Keith Boag   { Well, judging from the evening news and everything in the “Main Stream Media”- If it wasn’t about race, it is now. }

Obama to speak about alleged beheading of a U.S. journalist   { There are too many links to the video of this alleged beheading. I can’t watch it. My PTSD will flare up, probably off the charts. }

PM Harper leaves today for his 9th annual northern tour   { Trying to look like a viable choice to continue as Prime Minister?  He wants to show everybody that he’s big on Agriculture and Arctic sovereignty. I bet that doesn’t mean he believes the First Nations people up there are sovereign citizens of that region. He’s probably trying to say the ‘Crown’ owns the north pole. }

-Analysis- Never mind the West, can Justin Trudeau crack Fortress Quebec?   { Does this sound to anybody, besides myself, like the headline writer is trying to cast doubts about Justin Trudeau’s ability to win the Prime Minister’s job in the Canadian Federal Elections next year? }

Couple builds tiny house on wheels   { A couple is building their tiny dream house on wheels on the back of a flatbed truck in Guelph, Ontario. – See photo that should be above this- They spent eight months traveling around Canada and the U.S.A. with an even smaller trailer hitched to the back of fairly small car.  }

{ The above story is the only new one under “offbeat” on the CBC news web page. I imagine that anyone reading this from the Point of View of having lived in a much ‘saner’ society in a much less violent and anxiety riddled time would thing that all the stuff on this page is ‘offbeat’. }

MaraNatha, Trader Joe’s nut butters recalled over Salmonella risk   { Funny, this is the first time I had to type Salmonella anywhere- Maybe I led a sheltered life? Or just never typed as much news as I have in the last couple months- }

Iceland volcano: area north of Bardarbunga evacuated   { I hope Iceland doesn’t lose all their ice before Game Of Thrones finishes production- guess my priorities have been severely warped – sigh- }

Tom Hanks creates ‘Hanx Writer’ typewriter simulator for iPad   { But I guess I’m not the most severely warped creative individual on the planet. And, neither is Tom Hanks. }

Toronto Zoo investigates after visitors get too close to pandas   {  }

Officials urge world to back Iraqi fight against ‘savage’ ISIS   { Those ‘officials’ are Iraqi Foreign Minister Hoshiyar Zebari. I say, “Why can’t we knock these guys out with laughing gas, strip them naked and drop them in the middle of a tropical island somewhere where they’d have to spend all their time trying to survive against monster mosquitos and monkeys throwing coconuts at them? OH- and no cell phones or cell phone service, no internet- surrounded by starving Great White sharks- I mean, why do we put up with this doo-doo when we know it’s nonsense that could very easily have been dealt with long ago? If human beings were just a little bit nicer to each other we wouldn’t have these problems. What would we do with crazies who want to hurt people anyway? -or steal everything anybody else cares about? Feed them GMO lethargy-inducing crap and strap them into oversized recliners and force them to watch endless re-runs of Green Acres, The Brady Bunchh Leave it to Beaver and Gilligan’s Island etc, until their brains explode? Isn’t that what they’re doing to us? }

Why elephant poaching is still rampant   { Um, because greedy people don’t share their God-given abundance with impoverished ‘minorities’, which they believe are below them? It’s not just the poachers who are guilty here, it’s anybody who could have helped everybody on the planet learn how to achieve a life they could believe in. It takes more than a village- It takes every one alive to recognize the sovereignty of every other person here and make sure they have the basic human needs of food and shelter, and a pat on the back to raise their self esteem wouldn’t hurt either. }

Justin Trudeau gets RCMP security at rally following break-in   { I overheard someone say that, “Party thugs do this sort of thing all the time [try to terrorize their opponents and their opponents’ families]  -Especially when there’s an election on the horizon.” }

Shark finning banned in New Zealand   { It was already illegal there to remove the fins from live sharks, New Zealand passed a law to make it illegal to cut the fins off dead sharks and dump the carcasses at sea. }

Which 3 Canadian cities are on The Economist’s top 10 world ‘livability’ list?   {  Vancouver, Toronto and Calgary are on The Economist’s top 10 livability list. It isn’t perfectly clear, but one of those cities is tied with Adelaide, Australia. I’m not sure what the criteria are here. We listen to Coast to Coast am and hear that “Police had nothing to do after an earthquake knocked out a lot of utilities and phone service- but sit back and wait-” in New Zealand, where the people were so civilized, and cared so much about each other- that looting and other criminal activities in a time of ‘chaos’ were not a problem. }

-Video- Trivago guy to get makeover   { Trivago – is the travel metasearch engine that focuses on hotels. It launched in Dusseldorf, Germany in 2005- spread to Spain, France and the U.K. in 2007- and spread to the U.S., China, Japan, Brazil, and Mexico in 2009. In 2012 Expedia bought a majority stake in trivago for about $630 million U.S. bucks. Too many television ad watchers complained that current commercials feature a guy who hasn’t shaved in a week and looks ‘unhealthy’. I think the video I saw showed the same commercial with the guy digitally altered to look clean shaven. }

Liberals pledge to cut $250M in government spending   { If they want my approval, they’d have to pledge to end the governmental shell game and allow Walter Burien of CAFR1.com to audit their books and reveal his results in every media outlet in the world. }

Lac-Mégantic report lacking: Saint John region officials   { Saint John is in New Brunswick. Saint John’s is in Newfoundland. The official  report by the Transport Safety Board was big news and had its video sound bites played on most networks’ news last night. They blamed both the Railroad (MM&A) and Transport Canada (Sort of theCanadian version of the ICC which used to also include the Canadian version of the FAA) for its lack of oversight. My take is that Conservative Governments have been trying to ‘de-fang’ Transport Canada since the days when Mulrouney was their Prime Minister. Their ‘strategy’ is to make it impossible for regulatory bureaus to enforce their regulations so they can crucify them in public and claim they never worked anyway. The philosophy behind this ‘strategy’ is to allow industry to police itself, which, clearly, doesn’t work- never did work and never will work. The definition of ‘Fascism’ is ‘Government in bed with big business’ / Governments taking orders from big business / governments letting big business convince them not to tax them, but to raise taxes on the ‘common citizens’.

Conservationists slam province over watershed inaction   { Conservatives, not conservationists, are in power in New Brunswick. Their Minister of the Environment has not allowed any of the studies done by 19 groups, which were submitted for classification to go through and be accepted as ‘Baseline’ studies. Without the baseline studies, any amount of pollution from toxic fracking water or toxic sludge from mining operations could not be verified and companies doing the polluting/poisoning could be traced back to the polluters. Yesterday, the Provincial ombudsman called the current regulations  a sham and compared those regulations as something demanding that all homes have a type of smoke detector for which no one makes the proper batteries. <— I reworded that. If it’s confusing, blame me. }